The Old Oakland Community Garden was established in 2012 by hard working and dedicated members of the Old Oakland neighborhood with support from the Greater Lansing Food Bank Garden Project. 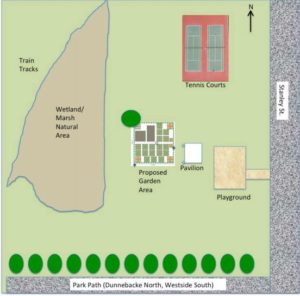 There was previously a formal association that was part of the Lansing Neighborhood Council, but participation and organization dropped off and in 2004 the association was dissolved. From 2004-2011 several neighbors wanted to make sure we maintained our Neighborhood Watch. At the same time we also started organizing many activities in Old Oakland. During some of our informal meetings in 2010 and 2011, several neighbors expressed a passing interest in establishing a community garden. In 2011, when the City of Lansing was considering naturalization of some of it’s park space, three residents attended a meeting with city officials and initially proposed the idea of starting a community garden in Dunnebacke Park. The officials were supportive of the idea, but indicated more formal requests needed to be made. In the winter of 2012, I and three other neighbors attended the Greater Lansing Food Bank Garden Leaders Training (GLT). During this training we established our vision for the garden, inventoried our assets, and planned the space. During this process it became apparent that we’d need an organizational structure to help manage garden tasks and funds. A small group of neighbors and I began drafting bylaws to reestablish our neighborhood association to become an official member of the Lansing Neighborhood Council (LNC). We also learned during that time that the garden idea would need to be approved by the Lansing Park Board.

Based on the information we put together during GLT, we drafted a small summary on how the establishment of a garden in Dunnebacke Park would benefit the city, the park, and the neighborhood. In February of 2012, I attended the Lansing Park Board (LPB) meeting. We laid out the following information for the LPB.

“Our vision for management and maintenance of the garden area is that the gardeners would tend to and maintain the garden area (raised bed planters, larger community plots, flower boxes, trails, and compost) and the immediate surrounding area including the small lawn between the pavilion and the garden. This would consolidate space and decrease maintenance cost by the city. We hope that the initial construction of the garden area is the first of many projects related to park improvement implemented by our garden and community groups. We hope to continue improvements to increase use, functionality, and natural beauty of both Dunnebacke and Westside Parks.”

The LPB approved our idea and we recognized that we’d need a formal structure to manage our resources and ideas. This was especially important because the garden was to be in a city park, so we wanted to have an organization in place to deal with funds and with interactions with the city.

Four people worked with the LNC, having several internal meetings to draft, revise, and finalize our bylaws. We officially joined the LNC at their meeting in March of 2012. At this point we were able to establish a bank account for our neighborhood (and also the garden). We considered this an important step, because we recognized that we needed some monetary resources to start the garden, so having a formal organization to manage funds was essential to us. 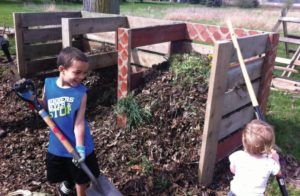 After this, we applied for a garden start up grant from the Garden Project, which we were awarded. We worked with the Garden Project (GP) to organize a workday to establish the Old Oakland Community Garden. We had two neighborhood meetings ahead of the workday. I met independently with the GP Coordinator, and we met with the city about installing a drinking fountain with a water spigot at the park. Our group of garden leaders got discounted lumber to build raised beds, coordinated with the city to get access to the shed at the Dunnebacke Park pavilion, coordinated the delivery of woodchips from local tree services, and coordinated free compost from the City of Grand Ledge with the delivery of the compost from a gravel train truck. We also worked with a neighbor and a gentleman who needed community service to do the initial tilling for our community planting area. A group of us also built a 3-bin compost bin, and we strung out a pea lattice. Working with our Lansing Councilmember Jessica Yorko and with Garden Project, we put together a press release for our inaugural workday. We had over 50 neighbors and GP volunteers on-hand for the workday. We constructed 40 raised beds and laid smothering cardboard and woodchips over all the pathways, all in 4 hours. It was an incredibly successful and rewarding day.

Dunnebacke Park was always a central meeting place for our neighborhood but the garden has proved a good way for us to interact with the city. It has allowed us to show the city that we are an interactive and engaged neighborhood group, which has in turn lead to increased attention, and expenditure of resources from the city. We have helped them with basic lawn maintenance around the garden, we do garden cleanup days that almost always involve the park, we maintain and do weed control on the tennis courts and in the playground, and we’ve helped with over 140 hours of labor improving the playground, and painting city structures. This has benefited the Old Oakland Neighborhood Association (OONA) because the city routinely delivers fresh wood chips for the garden paths, the lawns are mowed more regularly, and the city responded quickly to a safety concern at the park playground by removing an unsafe concrete landing and getting new cross walk signs installed. These projects have lead to the OONA to form “Friends of” groups for both Dunnebacke and West Side Parks. Overall the garden has been central to strengthening neighborhood ties and ties with the city. The garden continues to serve as a point of pride for the Old Oakland Neighborhood.